Scroll or use the quick links below to learn more about Code Championship and the people behind it.

What is Code Championship?

Code is Sport! Just like gymnastics 🤸‍♀️, dance 💃, or basketball 🏀. Competitive coding is fun and pushes us to be great! Join a tournament 🏆 and play head-to-head against other coders! 👩‍💻

Do I need to know how to code?

No experience or preparation is required, but if you would like to see what a tournament challenge will be like, head to our Play Now page and give some of the challenges a try!

We don't disclose which challenge we will be competing in until the day of the tournament, but it will be one of the challenges on that page! To get started, we recommend watching the video, then trying the Level 0 challenge!

Build a Code Championship Bot to play against other coders.

What is a Bot?

A "Bot" is a virtual robot. Each game is different, so each bot is different. Some bots move, some shoot, some drive, some drill, some fly, some eat, some duel...

Players write the code for their bot and then we run the bots head-to-head against one another to determine who wins the match! Here is an example of Alex and Quinn's bots playing head-to-head.

What is a Code Championship Tournament?

These tournaments are hosted online using Google Meet and the Code Championship website. If you have a modern browser like Chrome or Firefox, no additional download is required. The link to the Google Meet event will is emailed two days before the tournament. Every tournament will be a little different, but here is an example of a common, 2-hour tournament schedule.

What is a Code Championship Tournament Series?

A Code Championship Tournament Series is a series of four tournaments in four weeks (it's ok to miss one or two).

Who is invited to the National Championship?

If one coder wins multiple tournaments, another player will also be able to go to the national championship based on points earned during the series.

This can get complicated, but some people (like us) really like knowing the details. If you are curious to know more, you can click this link to learn more about scoring. 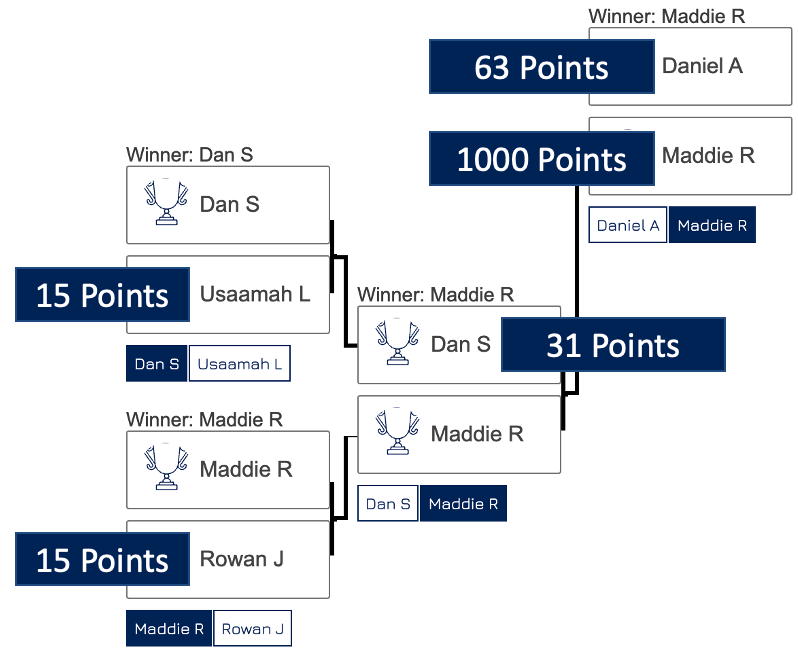 How do I join?

Joining a Code Championship Tournament Series can be done online in two minutes!

Ready to join the fun? Register for the Spring Tournament Series.

Learning follows excitement. So the real question we should be asking is, "How do we excite the next generation about code?" And that’s where the idea for Code Championship comes from.

We started with robotics competitions in 2014, and if we've learned anything over the past seven years of teaching kids to code, it is that Learning follows Excitement.

Competitive computer coding is our way to bring a sports-like mentality to code.

Abamath LLC is the company behind Code Championship.

We started as a Math Tutoring center. We started offering competitive robotics programs in 2014.

You can see from the video that it was a pretty exciting program!

We wanted to reach more coders, but our robotics program was hard to grow, since we needed to buy new robots for our new coders. So we developed Code Championship!

Today, we put most of our time and energy into making Code Championship as great as it can be, but if you have any questions for Abamath LLC, please reach out to info@abamath.com

Lindsey and Luke Schlangen (the two in the middle of the picture) started Abamath together in 2013. (You can see them both in the robotics video above!)

Lindsey and Luke are incredibly passionate about inspiring the next generation of coders.

LukeSchlangen.com
This is great. Our students enjoyed it and last year we got some kids coding who don't normally engage with computer science. Huge win.

Reach out! We read every email!

We don't do too much on social media. Our mailing list is the best way to stay up to date on what we're up to, but here are our links!